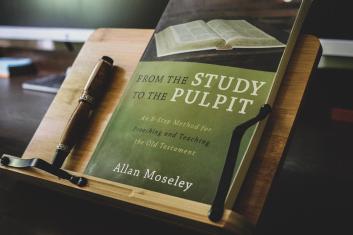 Allan Moseley’s From the Study to the Pulpit seeks to provide a comprehensive methodology for preaching and teaching the Old Testament. In the opening pages of his book, Moseley quotes Haddon Robinson on the need for such a method, “Clear, relevant biblical exposition does not take place Sunday by Sunday by either intuition or accident. Good expositors have methods for their study” (14). Moseley successfully provides anyone teaching the Old Testament with a such a method. This method aims to challenge readers to grow in exegetical proficiency while also providing a simple, usable process that they can use right away. The author succeeds in this task, blessing the reader with trustworthy manual backed by decades of teaching and preaching the Old Testament. If followed, Moseley’s method is sure to facilitate clear, relevant, and biblical teaching that pleases God and faithfully represents His Word.

END_OF_DOCUMENT_TOKEN_TO_BE_REPLACED

In part one of this blog, I discussed how the parting of the Red Sea teaches us the ever-important lesson that salvation is of the Lord. If we truly believe this, the second lesson naturally follows: that God will bring our salvation to completion. If salvation is of the Lord, he will complete it. There is nothing we can do to thwart his plan. Let the explanation of this truth through the consideration of the miracle at the Jordan River be of encouragement to our hearts!

END_OF_DOCUMENT_TOKEN_TO_BE_REPLACED

The parting of the Red Sea and the Jordan River are much more than neat miracle stories. They are central events in the unfolding drama of redemption that proclaim who God is and the nature of His salvation. In this post, I will discuss one fundamental lesson of salvation revealed in the first of these events.

Imagine the scene at the Red Sea: God had promised to lead His people out of slavery in Egypt and into land he promised to give Abraham, Isaac, and Jacob. Through many miraculous signs and wonders, God moved the stubborn heart of Pharaoh to momentarily allow Israel to leave. In dramatic fashion, the people evacuate Egypt, Pharaoh changes his mind and pursues Israel, and Israel seems to be trapped by the impassibility of the Red Sea. Their first thought isn’t to turn to God for help (easy to judge, but unfortunately we often do the same), but to complain and grumble against Moses and declare that they were better off in Egypt (see Exodus 14:10-12). Moses responds, “Fear not, stand firm, and see the salvation of the Lord, which he will work for you today” (Exod. 14:13).

END_OF_DOCUMENT_TOKEN_TO_BE_REPLACED

“For I was ashamed to ask the king for a band of soldiers and horsemen to protect us against the enemy on our way, since we had told the king, “The hand of our God is for good on all who seek him, and the power of his wrath is against all who forsake him.” 23 So we fasted and implored our God for this, and he listened to our entreaty.” – Ezra 8:22-23

END_OF_DOCUMENT_TOKEN_TO_BE_REPLACED

Song of Solomon 4:7-6:3. An allegorical interpretation of the Song of Solomon, depicting Jesus as our groom, highlighting our role as his bride, and the implications on our prayer lives.

I have often heard the phrase, “God is sovereign” in a way that has been spoken to me to give me encouragement in a tough time or situation. But I never really took the time to meditate on what it meant for Him to be sovereign. The term is defined by having supreme power and authority, a free ability to do as one pleases. In other words, God is in absolute control over every situation, and works out everything according to His will. Think on it for a while, and it will drive your brain into massive confusion. However, we are called to submit ourselves to and believe what scripture tells us, and trust in his sovereignty.

These past few days, I have read through the book of Acts, and I was struck with how much it reveals about God’s sovereignty-with regards to salvation! I simply would like to share them with you in a 3 part series, so that you too can see how God has worked out salvation for his people, and how you, too, if in Christ, were brought into salvation by his amazing grace.

In this first post, Lets look at the major theme of sovereignty in how God ordained the cross:

I had a very interesting conversation with a Muslim man the other day, who asked me if Christians hated Jews, because they were the ones who “killed Jesus.” This was the first time that I had really come across this misconception. Before I could reply, my friend with me answered, “No,no,no, we don’t hate them at all. We believe it was God’s plan all along, that he used the Jews and the Romans to accomplish his purpose of sacrificing Jesus!” This can be a tough pill to swallow, but Acts 2:23 clearly states for us that Jesus was crucified because it was the definite plan and foreknowledge of God. Let’s look at another verse:

In this verse we are told that not only did God plan it from the beginning, but you can see his plan through reading the prophets in the Old Testament. Lets look at one of the most well-known passages. Isaiah 53:5 reads, “But he was wounded for our transgressions, he was bruised for our iniquities: the chastisement of our peace was upon him, and with his stripes we are healed.” Isn’t is incredible that these words were written 600-700 years before Jesus birth? There are over 300 in the Old Testament like it! God surely had a plan, and was voicing it to his people all throughout history.

If you haven’t been convinced yet, lets look at one last verse,

In the most heinous crime committed in the history of mankind, God was behind the scenes, sovereignly ruling. His hand predestined for Jesus to go to the cross, and to bear the weight of our filthy sin. He planned it all, so that whosoever would repent and believe in Him, would have eternal life. This was the depth of his love for us, that he would send his own Son, who would be despised and rejected, so that we might have life with Him. “But God showed his love for us in that while we were still sinners, Christ died for us” Romans 5:8. Recognizing this plan helps us understand the cornerstone of the gospel, seen in Isaiah 53:10,” Yet it was the Lord’s will to crush Him.” Him- meaning Jesus.

People everywhere are commanded to repent and believe in this incredible gospel (Acts 17:30). How could we not accept so great a Savior? How could we not devote our lives to a God, who in his sovereignty planted the very tree that he would be crucified on-all to give us life and relationship with Him?

Truly, He is sovereign.

The book of Isaiah was written about 2700 years ago, an entire 700 years before Jesus walked the earth. Yet he writes about Jesus several times, identifying several specific aspects about his life and death that are perfectly fulfilled at the end of Jesus’ life. This is clear proof that God had preordained and planned the very events of the crucifixion that would cover the sins of the world!

Verse 7 of Isaiah 53 says that Jesus didn’t open his mouth. What does this mean? Well, when Jesus was brought before Pilate, twice scripture tells us that he was accused by the high priests several times, and in Matt. 27:13 Pilate asks him, “Do you not hear how many things they testify against you?” And in verse 14 it says, “But he gave him no answer, so that the governor was greatly amazed.” In very good book I read this past month, Pontius Pilate, it describes how unusual this was that Jesus didn’t offer a defense against the accusations of the Pharisees. Those who weren’t guilty would emphatically declare their innocent, yet even those who were obviously guilty offered some type of argument or defense. Jesus didn’t need to argue back or defend himself, for he knew what was to come, and knew that a defense would only hurt his testimony, his humility, and his obedience to the Father. In that moment, we were on his mind, and he remained quiet to be obedient, fulfill what Isaiah wrote, and to humbly embrace the crucifixion sentence that was coming.

This passage of Isaiah also describes Jesus like a “lamb that is led to the slaughter.” In ancient Judaism, the lamb was the most powerful sacrifices to atone for sin. We can clearly see this in the Passover in Egypt, when the Hebrews were required to sacrifice a lamb and paint its blood over their door so that they would be saved. When the angel of death came through Egypt to fulfill the final plague, those who had the lamb’s blood over their door were “passed over” and were saved from death. We must not think that this referring to Jesus as a lamb is a coincidence! In John 1:29 we read, “The next day he saw Jesus coming toward him, and said, “Behold, the Lamb of God, who takes away the sin of the world!” John exclaimed this the first time that he saw Jesus, for he knew exactly who he was and exactly what he came to do. Likewise, Isaiah intentionally prophesies about Jesus, calling him a lamb. When we compare the use of the lamb to the passover story mentioned above, we can see an amazing parallel that relates directly to Jesus’ sacrifice on the cross for us. Those for whom Jesus died (believers) are covered by the blood of the cross, just like the Hebrews were covered by the blood of the actual lamb, and by this covering we are saved from spiritual death, just as they were saved from a physical death!

It is through His death on the cross as God’s perfect sacrifice for sin and His resurrection three days later that we can now have eternal life if we believe in Him. The fact that God Himself has provided the offering (a perfect “lamb”) that atones for our sin is part of the glorious good news of the gospel that is so clearly declared in 1 Peter 1:18-21: “For you know that it was not with perishable things such as silver or gold that you were redeemed from the empty way of life handed down to you from your forefathers, but with the precious blood of Christ, a lamb without blemish or defect. He was chosen before the creation of the world, but was revealed in these last times for your sake. Through him you believe in God, who raised him from the dead and glorified him, and so your faith and hope are in God.”

A Note from the Author

Welcome to my blog!
What you'll find here is an attempt to share all that I am thinking and learning (usually from God's Word, Christ Covenant Church, seminary, or a book I'm reading) for the purpose of blessing people, edifying the church, and glorifying God. Please feel free to share, comment, and let me know your thoughts. Happy reading!