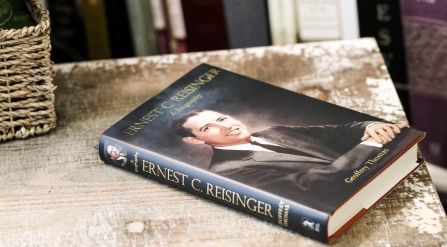 Ernest Reisinger has been called an “unsung hero” in the resurgence of Reformed theology in the late 20th century.  Though Ernie would likely reject the title and want to remain unsung, Geoffrey Thomas presents the essence of his contribution to the church by recounting Ernie’s life – a life that was a model of humble faith, faithful evangelism, and diligent service for God in whatever season of life he was in. A life that, as Ernie would say, was completely indebted to the sovereign grace of God. Ernie was instrumental in running profitable businesses, planting churches, pastoring churches, helping Banner of Truth books expand throughout U.S., promoting seminaries, training pastors, and providing thousands of theologically rich books to people around the world. Here are my five primary takeaways from his biography:

Ernie came to faith while working in construction through a lifelong carpenter named Elmer Albright. Elmer shared his faith regularly with Ernie and prayed for him fervently, as he did with many of his fellow employees, friends, and family members. God used Elmer’s faithfulness to bring Ernie to salvation. Though Elmer was just a simple carpenter, hundreds came to his funeral with testimonies of how his life and influence has inspired them to become Christians. Never underestimate what God can do with simple faithfulness.

After Ernie became a believer, he started a profitable construction business. In his role, he exemplified Christ’s grace and character through the care he showed his employees and his integrity in business. He shared his faith with his employees, his clients, and often hired people who were in difficult life situations so he could influence and help them. He also became a model of a man in “secular” work who cared deeply about the church, theology, and evangelism. Before he became a preacher after 25 years in the construction industry, several men were worried that he actually had more influence as a “layman” than he would as a preacher. God can use Christians in “normal jobs” to accomplish great things!

Though Ernie held different jobs and served in different capacities throughout his life, there is one thing he was always doing: distributing and giving away books, especially those produced by Banner of Truth. He gave men books and tracts while in the construction industry, he gave members (including their children) books in his pastorates, and he raised money to give Boyce’s Abstract of Systematic Theology to every graduating seminary student in the Southern Baptist Convention. He encouraged fellow ministers to always use the “26 soldiers” (a reference to the alphabet) in their ministries, because “the printed page never flinches, it never shows cowardice; it is never tempted to compromise. It never gets tired; it never gets disheartened. It works while you sleep; it never loses its temper in a discussion, and it works when you are gone from the scene.” Throughout his life, Ernie gave away thousands of books, several of which impacted the eternity of countless men and women’s lives.

Ernie’s life, in a sense, is not extraordinary. Rather, it is a testimony to the extraordinary God who can accomplish much through the faithfulness of His children. God used the little things of Ernie’s life – a business decision here, a book given there, a conversation about Christ here, a prayer meeting there, to weave the fabrics of Ernie’s life into a beautiful tapestry that displays the beauty of the sovereign grace of God. I pray that God would grant me the grace to be faithful in the little things, and watch Him use my feeble attempts to bring Him glory, just like He did in Ernest Reisinger’s life.

Link to the book:

A Note from the Author

Welcome to my blog!
What you'll find here is an attempt to share all that I am thinking and learning (usually from God's Word, Christ Covenant Church, seminary, or a book I'm reading) for the purpose of blessing people, edifying the church, and glorifying God. Please feel free to share, comment, and let me know your thoughts. Happy reading!